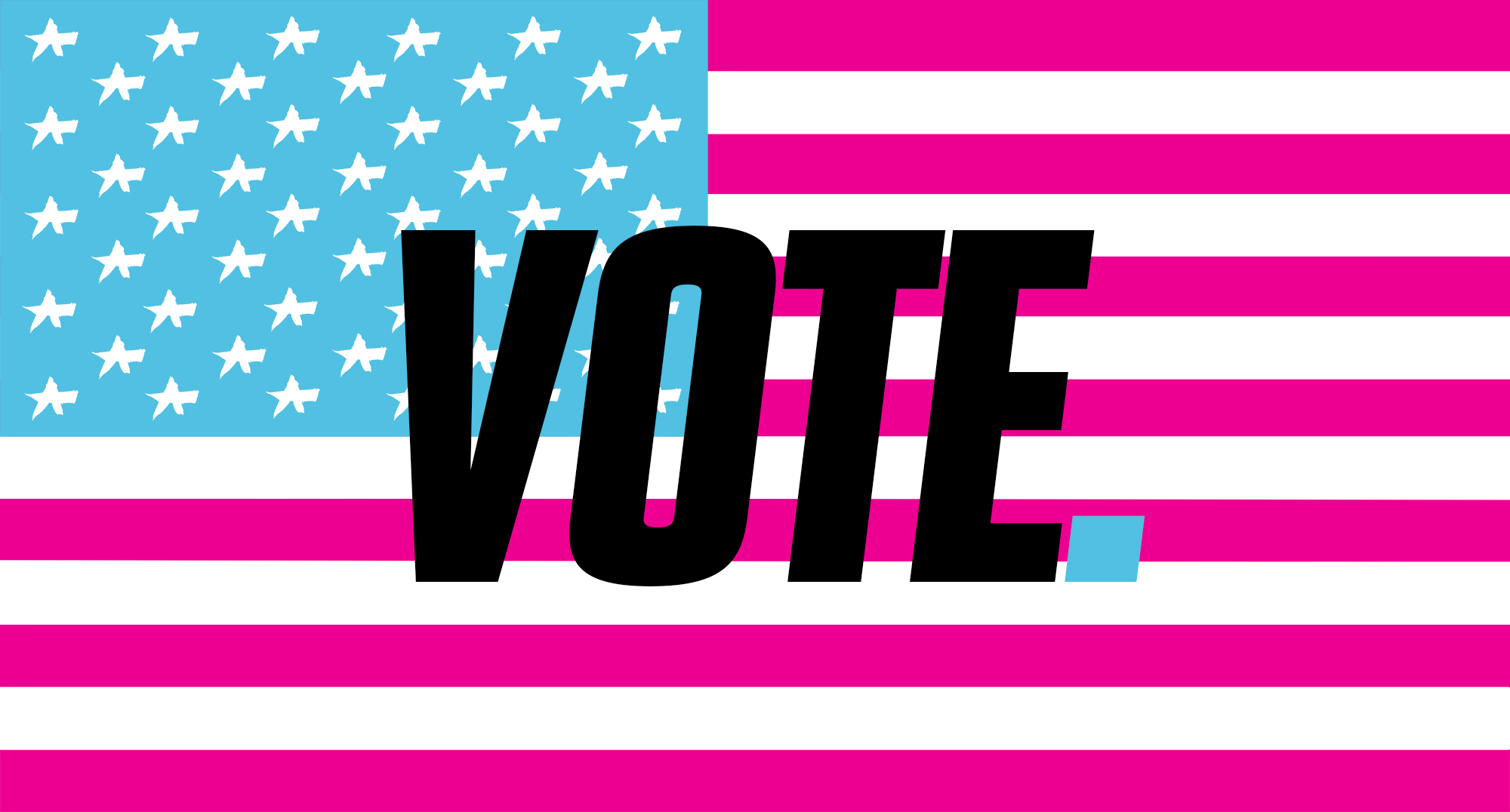 Make a plan to vote and then make a plan with your friends and family to vote. To help you make a plan and inspire you to get your vote to the polls, we’ve rounded up some resources for you. And, as a marketing agency, of course we want to lift up and highlight how brands are helping to turn out the vote. So first up are resources for our local Maine Voting community, then some fun facts about close races decided by only a handful of votes, and last but not least, some of our favorite ads and messages about voting. Let’s dive in.

IF YOU PLAN TO VOTE IN MAINE

Below are some quick reference facts about voting in Maine to help set you up for success.

If you’re thinking, ‘ugh, I’m not even going to bother…’ then check out these close races to see how literally every vote counts. These barely scratch the surface, there are many more examples of close races in our nations history, especially as you examine local politics. Here were some of my favs.

So many brands are aware of the importance and power of voting. Check out some of our favorite GOTV (Get Out The Vote) ads from this year.

PATAGONIA: VOTE THE ASSHOLES OUT 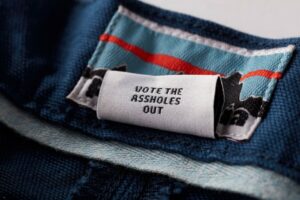 This tag is found on a range of shorts from the Patagonia line up.

Patagonia’s founder, Yvon Chouinard, is known around the globe as one of the original dirtbaggers, and I mean that in the most loving and awe inspiring ways. A “dirtbag” in climbing culture is someone who, in general, subsists on as few resources as possible in an effort to maximize time climbing or in the outdoors. Picture living in a car or backpacking full time. Yvon spent his youth climbing and backpacking, in the great outdoors and has now built a brand around protecting those wild places and our planet. In a blog post for 1% for the planet Chouinard said;

“Remember, vote the assholes out—all of those politicians who don’t believe we should do anything about climate change. Vote for the planet and against those who would do nothing. We have the power and now is the time to use it.” – Yvon Chouinard

SEVENTH GENERATION: VOTE FOR THE FUTURE

Seventh Generation is making a call out to all voters to vote for the planet on behalf of the generation that is too young to be able to vote. They ran ads surrounding the presidential debates and have been running a strong campaign and have a great resource for voters as well. Check out their Vote for the Future page to hear stories from young folks and how important this election is to them. They even have a spot where you can check to see if you are registered to vote.

Pernod Ricard USA is giving all its employees paid time off on election day to get to the polls, and the CEO (Ann Mukherjee) is urging other industry leaders to do the same. To encourage the American public to turn out to vote, Pernod Ricard is using their flagship premium vodka brand, Absolut, as a platform. With the call to action of ‘vote first, drink second,’ it’s a smart message whether your candidate wins or loses.

Can’t think of anything more American than blue jeans and voting. Check out levi.com/itsyourvote to learn more about how this classic jeans brand is making a statement and helping to inspire people to get to the polls. 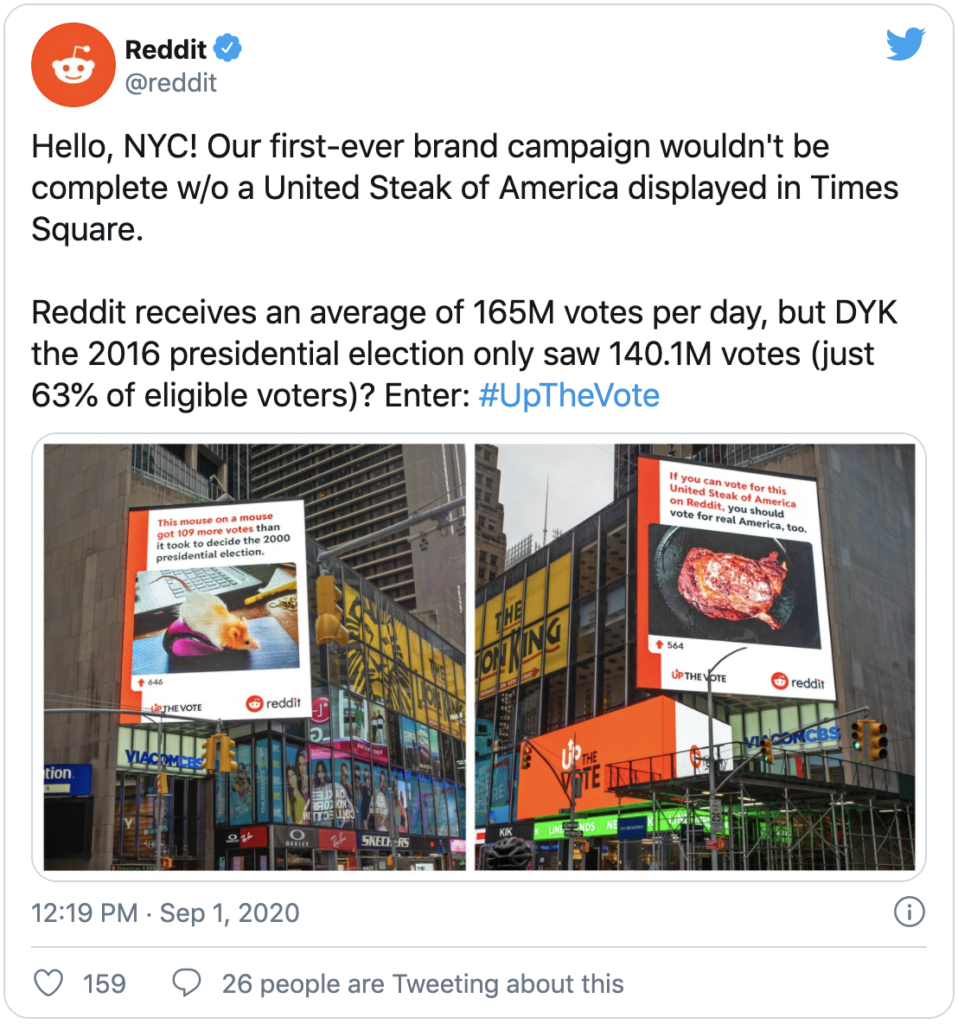 Reddit is running a comprehensive out-of-home digital campaign hoping to inspire more people to turn out to vote. Ready to have your mind blown? Reddit received an average of 165 million votes PER DAY! Rewind back to 2016, and the US Presidential election only received 140.1 million votes. Check out more about Reddits UP the Vote.

What are some of your favorite GOTV ads you’ve seen this cycle? Let us know at content@dirigocollective.com.

And because having a plan to vote is so critically important, download and print out the below PDF to help you think through and visualize when you’ll be voting and then walk your friends through the process to make sure they have a solid plan to vote. These are also great for parents and teachers of first time voters to print out and share with young adults to get them into good voting habits early on.

At the end of the day, voting is the lifeblood of our democracy. In my previous work as a political field strategist working on both ballot campaigns and legislative campaigns, I can assure you, your vote and record of voting holds more power than just on election day. Every time you vote, you create a record of voting, a pattern of “being a good voter.” And those elected, whether you like them or not, pay attention to “good voters.”  When you make calls, write letters, or work to lobby your elected officials, or request constituent meetings, if you have a strong record of voting, your voice has more weight. So not only are you deciding who is in power on election day, it will be the weapon you yield as you hold those we elect accountable in the future.

So make a plan, and VOTE.