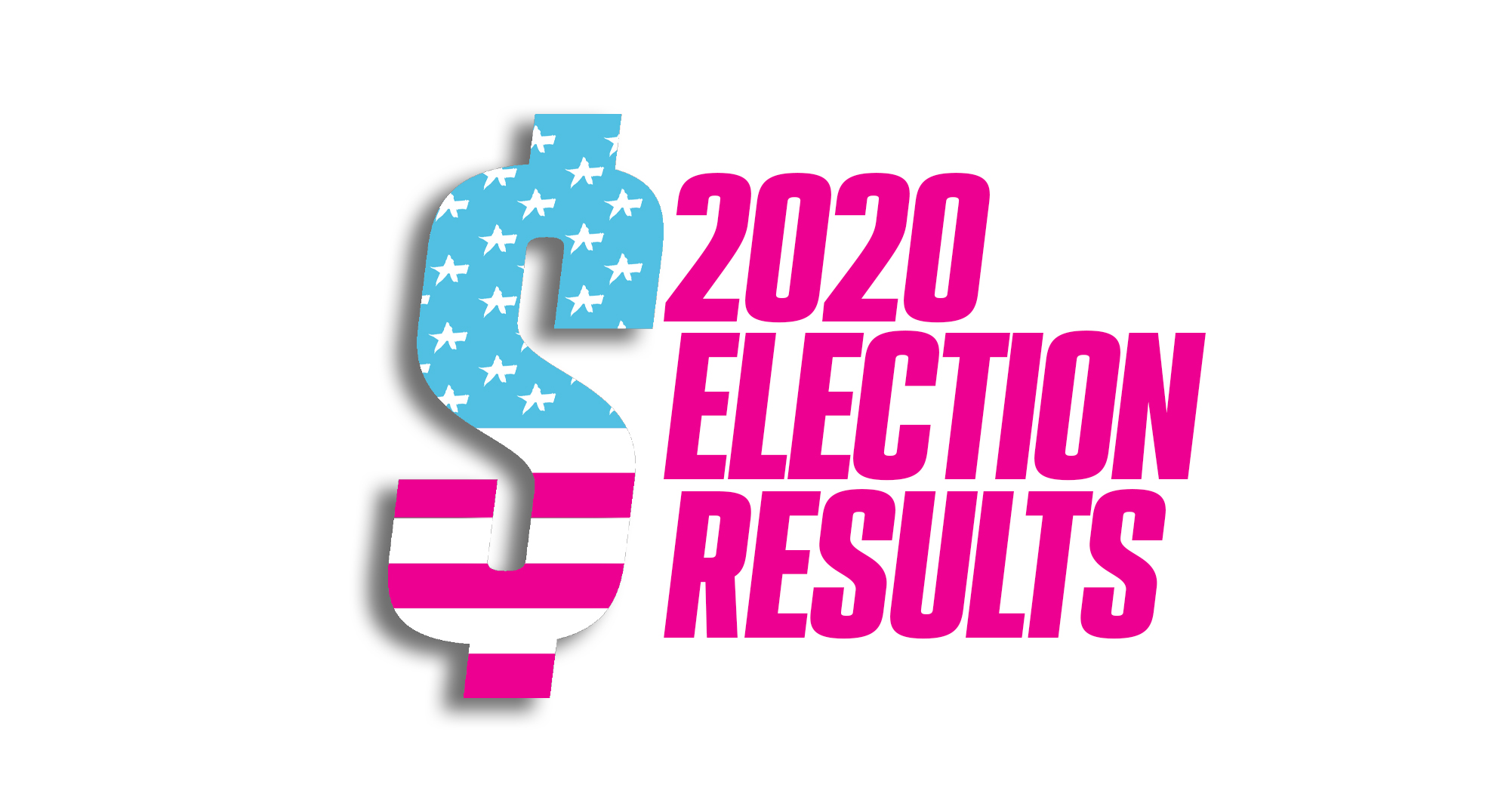 Whew. Media buyers rejoice with the close of another political window! Months of stress, anxiety, and political ads are finally coming to a close for the rest of us. Let’s take a look at who spent what, where, and why, as well as the response to the election from brands and ad agencies around the world.

The goal of any political campaign is simple; to win. 50% +1 vote and you take home victory, or in the case of a presidential campaign, 270 electoral votes or more. To win, campaigns reach voters through two modes; “communications” (what we’ll talk about here) and a comprehensive ground game, or field operation. The field team is by and large the most effective way to reach and move (persuade) voters. Those are the amazing volunteers that knocked on your door, called you on the phone, or sent you unrelenting text messages. And as much of a nuisance as those calls, texts, and dinner time interruptions may be, it is the sign of a healthy and robust democracy. While direct conversations with voters is the most effective tool, it also happens to be only responsible for up to five or six percentage points on election night. In most cases field teams are not able to reach every voter, so the communications team ends up holding the basket for reaching 80%+ of voters. How do they do that? Paid & earned media along with direct mail to name a few.

Programmatic buys help focus ad dollars on key audiences. Why waste money trying to reach people that will never convert or trying to persuade people who already love you? Programmatic buys allow for a level of audience targeting that is hard to otherwise achieve outside of digital spends.  Video is hands down one of the most engaging forms of content out there (aside from experiential). It’s the same reason someone knocking on your door and having a face to face conversation is more impactful than you having the same conversation with the same volunteer over the phone. People are more likely to remember and engage with video.

This chart from MediaRadar shows the spends of programmatic online platforms of national campaigns from January through October of on average 20 different campaigns for a total spend of roughly $9.5 million. 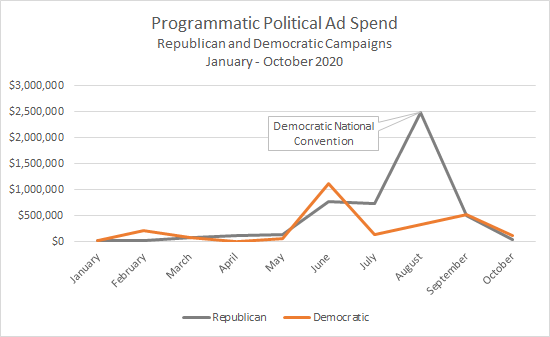 This chart from AdAge includes all spends and runs from post primaries into the general election. 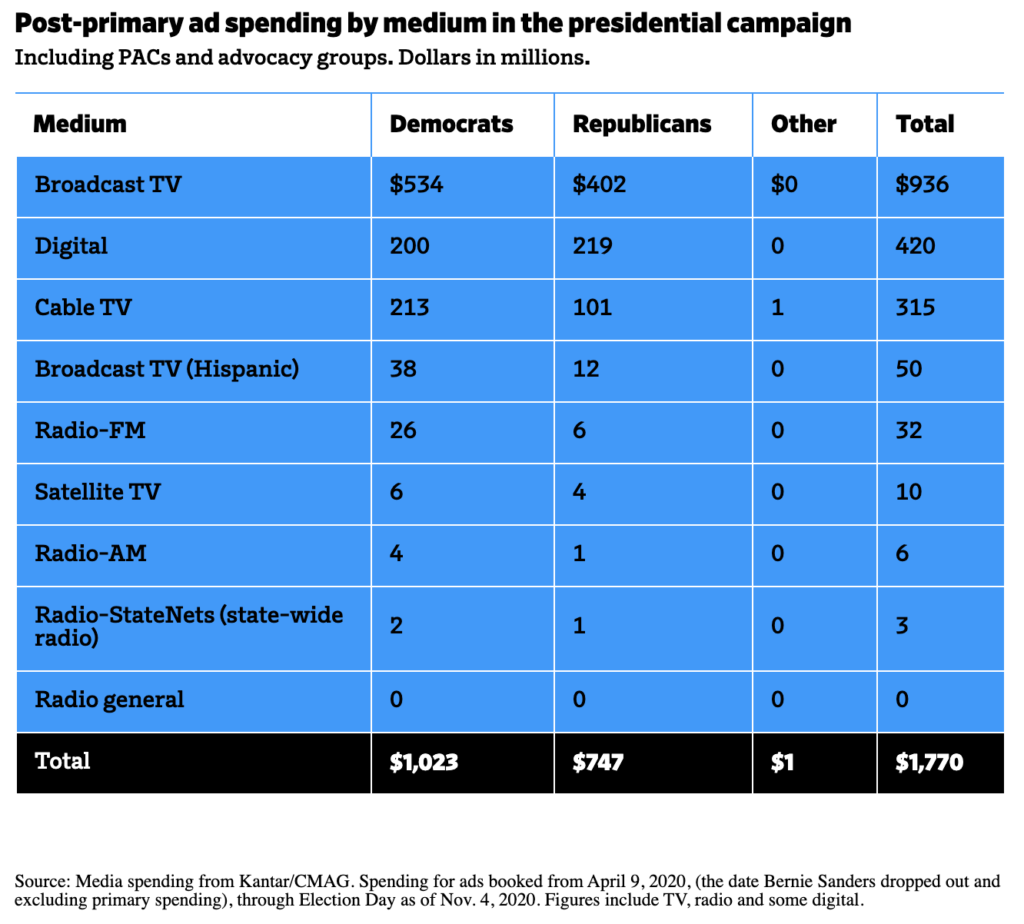 So now what? What has the reaction been to this wild rollercoaster ride of an election cycle? Brands and agencies all around the United States have been voicing their thoughts, some in more subtle ways than others. Check out below to see some of our favorite highlights.

A Portland favorite and local B Corp, here’s what Coffee by Design posted in the wake of the election on Instagram.

We love our B Corps, and Ben & Jerry’s has never shied away from what they believe in. What’s even better, is that they back up their stance with facts and data. Click here to read their full statement.

Real subtle Oreo, I like what you did there. 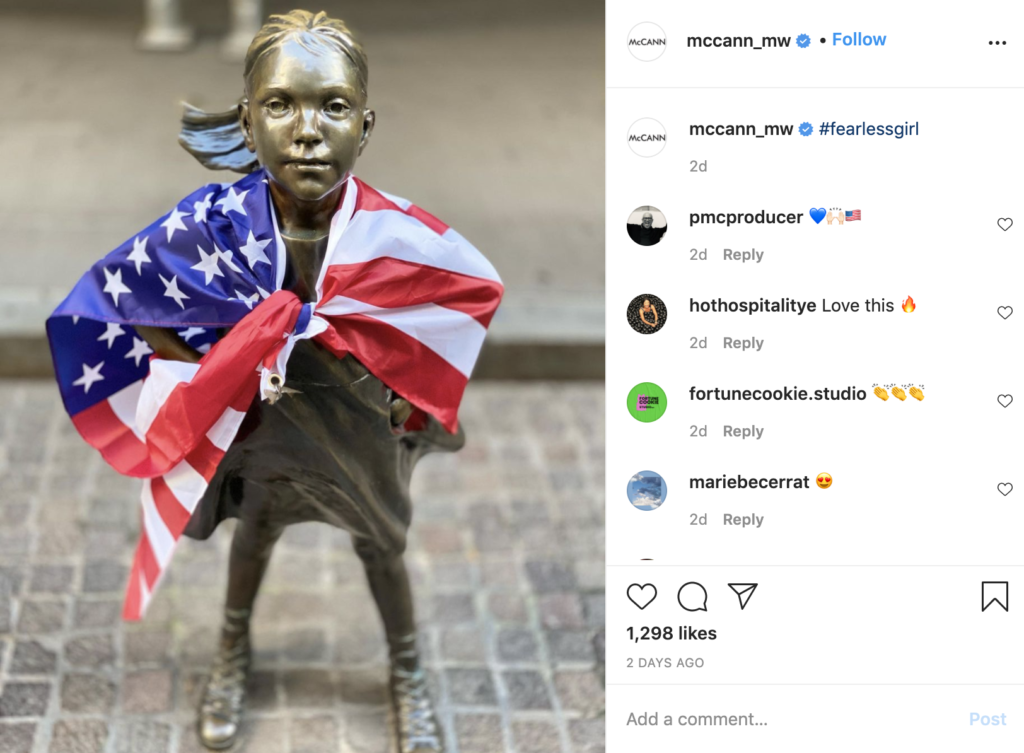 Sharing their thoughts on the President’s behavior.

Mic drop, from one of the fastest growing dating apps, Bumble.

As for us? Well we’re big believers in Democracy and are happy to see the strength and vitality of that institution remains alive and well here in the United States. A huge congratulations to a well earned victory for President-Elect Biden and VP-Elect Harris.